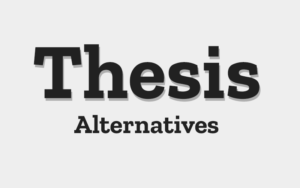 Once upon a time, Thesis Theme was the gold standard for WordPress themes. More of a framework than a standalone theme, Thesis is an incredibly flexible backbone that let you craft nearly any type of design or site.

But several (debatable) missteps by Thesis’s developer (DIY Themes) have damaged its reputation, and dozens of high-profile bloggers have jumped ship. Pat Flynn, Matt Cutts and Harsh Agrawal all dumped Thesis Theme in favor of alternatives (most moved to Genesis).

Nowadays, few new sites are built on Thesis as there are dozens of better (and cheaper) options.

These are the best Thesis Theme alternatives worth considering.

Genesis is easily the closest competitor to Thesis Theme both in terms of design and longevity. Initially launched in 2010 (2 years after Thesis), Genesis is a survivor in a crowded industry. And legions of talented devs swear by it.

Like Thesis, Genesis is a framework, meaning it’s meant to be used with a child theme (to handle the styling) while Genesis powers the functions behind the site.

Our Take: Genesis is an excellent backbone for sites managed by a developer, but isn’t the best choice for most solo-bloggers. It’s hard to customize and relies on a php-based hook system to change layouts and edit the theme’s front-end. I built my first WordPress site on Genesis, but have since moved it to GeneratePress.

GeneratePress is what Genesis could have been if it was built for the average WordPress user.

It’s an incredibly powerful framework-like theme that can be used to build any type of website. But it’s still accessible to non-coders thanks to the excellent addons bundled with GeneratePress Premium.

The premium version lets you build site components with Gutenberg blocks (headers & footers for example) or inject any type of content into the dozens of hook locations built into GeneratePress templates.

Want to insert a custom opt-in form at the top of posts in a specific category? This is incredibly easy to do with a few clicks inside the GeneratePress Elements module, and you never have to touch PHP code (unlike Genesis).

I personally use GeneratePress on most of my latest projects (including this website). There’s a bit of a learning curve to harness its full power, but once you do you’ll feel like Neo in the Matrix.

Our Take: If you’re a WordPress power-user or have same basic CSS skills, GeneratePress could be the perfect Thesis Alternative. Especially if you’re speed-obsessed like we are. There’s a free version but it’s quite limited. I highly recommend going pro.

Astra is the most-downloaded theme in the WordPress repository, surpassing 1 million installs.

In many ways its very similar to GeneratePress. It’s quite flexible with adjustable layouts and relies on a hook system for customization.

The free version of Astra has better styling controls than most of the other themes on this list, and Pro upgrade makes it even better. Pro gives you a hooks module, header builder, more styling controls, and better layout/design options.

Compared to Thesis, Astra is a revelation. Not only is it easily customizable by beginners, even the free version is usable. You can even import full demo sites (from a limited site library) in Astra free.

Personally, I chose GeneratePress over Astra (I own both, though) because of the better quality of the support team, the cheaper lifetime license, and better Gutenberg integration. But I also am well versed in CSS and passable at PHP. For Beginners, Astra may be the better choice.

Blocksy is a relative newcomer, but I’m incredibly impressed by both the quality and general approach Blocksy takes to theming.

Like Thesis (and the other themes above), Blocksy is designed more like a flexible framework. But it packs even more power under the hood than competitors like Astra & GeneratePress.

And it’s even easier to use than those themes too. In fact, the primary drawback of Blocksy might be the shear overwhelming capability it has.

Here’s a sampling of what you get with Blocksy pro:

Whew, that’s a lot. And if you’re a power-user, Blocksy might be your dream theme.

Kadence Theme is very similar in concept to Astra and GeneratePress, though the team takes a different approach to customization.

It’s got customizer controls for typography, branding and colors. But that’s just a start. You also get full layout control, including customizable sidebars, headers, footers and menus.

Kadence lets you visually build your header and footer with an intuitive drag-n-drop interface. Or you can just import a pre-built template from their extensive site library.

Avada is one of the bestselling premium themes of all time, and one of the few that I recommend from the Themeforest marketplace.

Not only is it incredibly flexible, but Avada comes with a ton of pre-built layouts and starter sites that can save you hours of time that you’d spend on setup on customization.

Avada is more like a classic theme than Thesis (less of a framework) but is still highly flexible. Add to that an integrated page builder (which also works as a theme builder) and you’ve got a powerful package.

And because of Themeforest’s licensing, you only pay once but get updates for life, which can be a better deal than recurring licenses like Astra and Thesis if you only need it for one site.

Divi isn’t for everyone, but there’s no arguing with its success. According to WPThemedetector, it’s the #2 most popular WordPress theme (behind Genesis).

Divi’s success is a direct result of it’s usability. Even novice WP users can get full control over their site’s design and layout. It’s infinitely customizable with the integrated Divi page builder.

And you don’t just get to control basics like typography, colors and widget areas. You get full template control and can easily build new templates for your posts, pages, or custom post types. This level of customization usually requires PHP abilities, but Divi makes it drag-and-drop simple.

Of course all of this comes at a cost, mostly speed and lock-in risk (hard to switch to another theme without rebuilding your entire site). That’s not to say Divi is slow, but it’s easy to overdo it with so much power at your fingertips.

OceanWP is quite similar to Astra and GeneratePress in its flexible framework-y approach. But this is no cookie cutter clone.

OceanWP differentiates itself with its bundled modular extensions (in pro) which let you bolt on all kinds of functionality. Whether it’s a GDPR cookie notice, off-canvas panel, sticky widgets, or custom footer, OceanWP has you covered.

And you can enable only the modules you need, keeping your site leaner and load times faster.

But OceanWP doesn’t stop there. There’s deep integration with both WooCommerce and Elementor. OceanWP Pro even comes with custom Elementor widgets, making it a great choice if Elementor is your page builder of choice.

What happened to Thesis Theme?

Thesis theme originally launched in 2008 and quickly achieved god-like status in the WordPress community. It was frequently mentioned as the go-to framework for WordPress power-users and high-traffic blogs.

The first spot of trouble came when Matt Mullenweg (the creator of WordPress) announced that all WordPress themes needed to be GPL-licensed in order to be listed in the WordPress repository. Matt took it further and contented that anything built atop WordPress was GPL by definition.

Chris Pearson (creator of Thesis) held out and refused to change the theme’s licensing. As a result, sales plateaued and the feud dragged on in public for years.

In the meantime, Thesis angered some of its customizers directly by refusing to support Yoast SEO (the most popular SEO plugin at the time). Despite Thesis’s built-in SEO functionality, this was a dealbreaker for many bloggers. And I don’t blame them.

Eventually, Pearson capitulated and decided that the next generation of Thesis Theme (Thesis 2.0) would be GPL-compatible. Unfortunately, the Thesis upgrade wasn’t managed well (according to several thesis devotees).

One of the most noticeable errors was the lack of good documentation before the release, making the migration from 1.X to Thesis 2.0 incredibly painful. This was the last straw for well-known blogger Harsh Agrawal.

Since 2012 (the year Thesis 2 was released) interest has dwindled, and it’s well outside the top 25 most popular themes now, behind even aged releases like the official twenty-twelve theme.

Though it’s still around, Thesis Theme isn’t the go-to option for many new sites. There are so many better, more powerful themes available that Thesis has largely fallen by the wayside.

And it’s not just about functionality, it’s about documentation and education too. There are hundreds of free tutorials for Genesis, GeneratePress and Astra that will hand-hold you through the entire site-building process.

But for Thesis? Not so much.

Themes I recommend instead of Thesis: